skip to main | skip to sidebar

Having broken the earhole end of my stethoscope, I started wondering how I could improve it. I've long fancied building an electronic stethoscope, but it has previously gone in the "too hard" basket. So I took the diaphragm end off it (the cold part) and set about finding an amplifier. Good old dealextreme.com came up with the goods in the form of an "iSpy spy ear" for under 3 bucks. 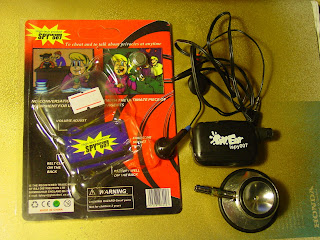 The spy ear is a simple, 3 transistor amplifier with an ordinary little cylindrical microphone inside. I used heat-shrink tubing to attach the microphone to a short piece of plastic tubing from my hydroponics. It has an ID of 6mm and an OD of about 8mm, so it just happened to have the same OD as the microphone and take the end of the stethoscope. 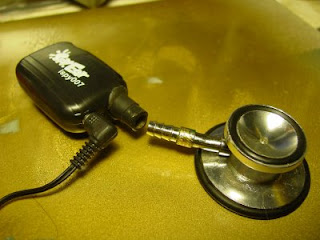 Opening up the spy ear was easy; there's a single screw in the battery compartment. The casing needed to be carved out a bit with a Dremel, and then everything was pushed back together with a bit of hot Polymorph ("Shapelock") around the microphone to make sure it all stayed together. It's normally white but I happened to have some dyed black with candle soot. The wires attached to the microphone seemed rather weak - both broke - which is why I was keen on making the connection to the stethoscope diaphragm as sturdy as possible. 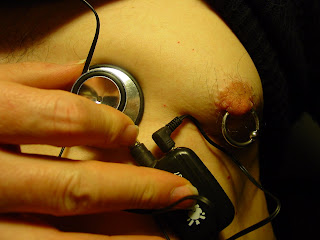 The end result: an electronic stethoscope. It's not wildly better than the ordinary kind, but it has a few distinct advantages. First off, when you knock the earphone lead it does not make unwanted noise like the tubes on the conventional type. Secondly, I can plug a powered speaker from the PC into it to help other members of the brigade listen to things as a group on training nights. Finally, if the surroundings are noisy like they tend to be in the back of an ambulance I just turn up the volume.

I'm going to get a set of in-ear earphones on a retractable lead and see how well it actually performs in the field. I know that commercial electroscopes are available, but not on my budget!